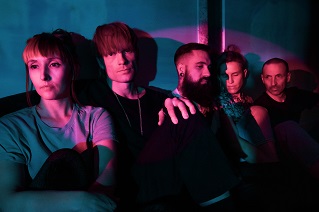 MOTHER MOTHER – THE INSIDE TOUR

Vancouver indie rock band Mother Mother’s eighth full-length album Inside takes its inspiration from self-reflection, something band frontman and songwriter Ryan Guldemond was forced to do in the wake of the COVID-19 pandemic. “The world stopped, and all of sudden I had a lot more alone-time on my hands, which isn’t necessarily conducive to songwriting,” Ryan says. “Usually, I like to venture out and find guidance from an external, interactive narrative—travelling, people, serendipities etc. I love that process –it’s almost like you’re in collaboration with the world. But since that wasn’t an option, I set about a different kind of travel, one more inward and personal, exploring different types of therapies, meditation, and journaling as a means to unearth songs from a deeper, interior place.”

After several months of writing and recording demos in his home, Inside was recorded with Howard Redekopp, who produced the band’s first two albums. In many ways, the album both expands on Mother Mother’s prolific career, and connects them back to the origins of their success. In the summer of 2020, the band began to notice that fans were flocking to streaming services in unprecedented numbers to listen to songs from their first two albums. It was revealed that these songs, including “Hayloft,” “Arms Tonite” and “Wrecking Ball,” had become recent Tik-Tok hits connecting them with an entirely new generation of fans, resulting in a Rolling Stone feature, multiple appearances on Billboard’s Emerging Artist Chart, and millions upon millions of streams and followers on streaming services and social platforms. It was a welcomed reinvigoration ahead of the release of Inside. For the band, who have toured extensively over the years, regularly selling out shows in New York, London, Los Angeles and Toronto, finding new fans with old music is simply part of the journey. “It feels like a big, surreal gift from the universe,” says Ryan. “For us, it’s always been about the joy of music, and sharing in this joy with others, so the more the merrier, and it doesn’t really matter if it’s an old or new song someone is connecting to. Songs don’t understand the concept of time. They’re eternal.”

Inside brings Mother Mother full circle, reuniting the band with Howard and reminding Ryan that the best creation begins by reflecting on yourself rather than what’s around you. And while Inside dabbles in darkness, it’s ultimately about love and healing in the face of challenges and turbulent world circumstances.

Please note: our Box Office is not open for window sales at this time. Patrons can order online or over the phone with a credit card. We cannot accept Visa-debit or Mastercard-debit cards at this time. We apologize for any inconvenience.